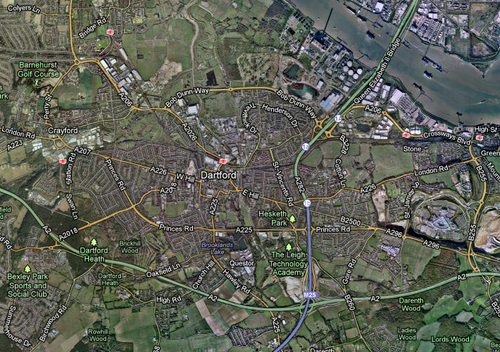 Mum was eager to finish shopping and start the long walk home up Dartford’s East Hill. My brother was sat on the pavement, struggling with his shoelace. That was the trouble with our butcher’s shop. The sawdust on the red tiled floor needed to be piled into mounds with your feet, and you only had until the butcher stopped talking to mum, so you had to work fast, and sometimes it got in your shoes. Mum wasn’t a fan of our game, but the butcher never seemed to mind.

“Hurry up and get that shoelace tied, or Mum won’t let us look in Phillips toy shop" I whispered to my brother.

I liked looking at the bikes in Phillips, but my brother preferred the train sets. The shop keeper was friendly but always very busy, quietly wrapping things in brown paper for excited children. “Mum, one day, can I buy the yellow racing bike?” I said. ‘Maybe when you’re a bit older.’ she replied.

Alternately pressing your hands down on your knees helped when trying to climb East Hill. Your legs needed all the help they could get. I can only assume Sir Ranulph Fiennes employes a similar technique. It seemingly took years to walk home.

I don’t know when the butcher’s shop disappeared; I’m ashamed to say, I didn’t even miss it.

Presumably not long after that, the shop keeper in Phillips quietly set down his roll of brown paper for the last time and called it a wrap. What a shame.

Market forces dictate what’s on the high street. It’s merciless, and awesomely efficient. Put simply you use it, or lose it.

But times have changed, just look at the upside. Now I can jump in my car, quickly pop to the supermarket, everything I need is in one place, and I don’t get wet in the rain.

In fact, my wife and I are far too busy to go to the supermarket; I’ll just go online and get it delivered. I don’t have to leave the comfort of my own home. I won’t have to load the kids into their car seats. I haven’t got to deal with anyone.

Our standard of living has improved.

“I was talking to one of the other mum’s in the playground today; it turns out she lives at number eight.”

‘Ha, you’ll probably find that most of the people that live round here are really nice.’

Except we don’t know.

The people either side and opposite are nice. The rest of the close, who knows?

Strange really, that people never seem to cross paths with the neighbours they share them with.

The trouble is, we’re so busy, and everyone else is too. I’m sitting here watching TV, and using my laptop – at the same time. I wonder what everyone else is busy doing? I’ll check Facebook.

Instant connection to friends and family, some great photo’s of what they had for dinner, but I’m still left wondering where the local community went?

It’s probably the supermarkets fault. They’ve destroyed our town centre, it’s nothing but pound shops. If we had a town centre, we’d still have a community. It’s about time they demonstrated a bit of social responsibility and were forced to give something back.

In fact, it’s the Councils fault. They have let the supermarkets ruin our town centre. They’ve done nothing about the traffic, or the parking. They never listen to us.

It’s ok though, I’ve heard that Mary Portas is coming to sort out Dartford high street, and if that doesn’t work then it’s all her fault.

But maybe, it’s my fault?

Maybe to be a member of a community requires some effort on my part.

Maybe I should have spent a little more time, energy, and money in my local shops. I should have realised that purchasing goods is more than just a monetary transaction. It’s a vote, for a deserving shopkeeper, who’s friendly service and warm smile I’d rather not live without. Or an investment in a young entrepreneur, who’s giving their all to get their fledgling business up and running, which I’d like to see succeed.

Market forces have improved the standard of living, yet seemingly reduced the quality of life.

When did I start passively consuming, and stop actively participating?

Oh dear, it’s all my fault.

Fortunately it’s not too late.

I assume i’m not alone in wanting to be part of a friendly community. So what can I do about it?

I’m off to have a think.

This piece was published in the July 2013 edition of Dartford Living.

Mea culpa: writing books describing how the world should be: to escape the practical challenges of actually changing things. – Alain de Botton I like that quote. I’ve internalised it as a warning: “Mike, don’t write about how things... Continue →