I don’t think my high street will ever be the same again. 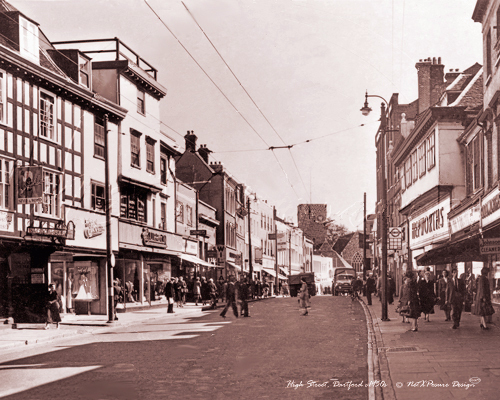 “Thinking is the hardest work there is, which is probably the reason why so few engage in it.”

I didn’t think of that. Henry Ford, the American industrialist and founder of the Ford Motor Company did.

I agree with the first part.

Thinking is virtually impossible when your child wants your attention.

‘Yes William, that’s a lovely bike. Is that one your favorite?’

My son absolutely loves bikes. ‘Bike’ is one of the dozen or so words he has mastered so far, but it’s said with much more vigour than the rest. He’s always sitting with his bike book on his lap, looking at the pictures.

Recently I’ve been trying to think (and it’s a lot harder than I thought). I’ve been thinking about how to save our high street.

A couple of weeks ago I wrote down the problem. The high street shops have disappeared and It’s all my fault.

I stopped using my local shops because alternatives were more convenient. The result?

High street shops that I loved as a child went out of business, and our community suffered for it.

So I thought about it.

I thought back to what Dartford high street used to look like. It was full of shops - retail facilities. It was primarily a place to sell goods to people.

And then the people demanded more choice. The efficient method of providing such variation were supermarkets; enormous warehouses full of goods. With free parking. Bonus!

And then the internet happened. Goods that could be digitised were. Music stores and bookshops vanished. Purchase and delivery methods for that which could not be distilled to data, were revolutionised. You’re telling me that I can sit here, order my food shopping, and then someone delivers it to my door?

With all this additional convenience, how do we save our beloved high street?

And then… I realised I had written down the wrong problem.

My problem is nostalgia.

It’s the rose tinted view of how things used to be. It’s the memory of Phillips toy shop with those shiny bicycles.

‘Yes William, bikes. There were lots of them, all hanging from the ceiling. You would have loved it.’

Nostalgia is where you’ve been, it’s a great way to measure how far you’ve come, but it shouldn’t be used as the guiding principle for where you’re going.

“We don’t want tradition. We want to live in the present, and the only history that is worth a tinker’s damn is the history we make today.”

I didn’t say that, Henry Ford did.

I agree with him.

We have fond memories of our favorite childhood shops, which help us construct the mental image of our high street. They are of course different for all of us (although for many Dartfordians I bet Phillips toy shop is there somewhere). So if that high street never really existed, it’s impossible for us to return, even if we wanted to.

One that affects us all.

It’s possible to criticise transport from many angles; its cost, its tardiness, and its damage to the environment. Yet we continue to think that by making incremental improvements to it, we’ll solve its inherent problems.

“If I had asked people what they wanted, they would have said faster horses.”

But perhaps our high street can?

The same technology that digitised the products we buy and the way in which we buy them, has also become part of our working lives. Emails, video conferences, mobile devices, and cloud based business infrastructure are the digital representation of the tools we used to use. The daily commute and the city based office become increasingly superfluous as high speed data transfer enables remote working.

So, what if we convert some of that empty retail space on our high street into offices and small workshops? Create pleasant modern working spaces, with everything you need to do your job from the comfort of your own town. And lets rent out a space in this business hub for less than the cost of the daily commute. We don’t want people to work from home in isolation. We want to encourage people to work near home, and benefit from the social and network effects of being part of their local community.

Whilst working from this local hub, you will probably grab a coffee, you might pop out for some lunch, and maybe after work you’ll meet friends for a glass of wine and a catch up. So we’ll need local cafes, bakeries, restaurants, and bars on our high street too.

It’s starting to sound like a high street that’s worth visiting.

Years ahead of his time that Mr Ford.

So to hell with the car, and my becoming traffic for an hour. I could rent a desk in a business hub on my high street. I could spend that extra hour eating breakfast with my family and I could ride there on my…

Come on then William lets go for a ride. Shall we stop off somewhere for a chocolate muffin?

This piece was published in the August 2013 edition of Dartford Living.

Long live the high street, the customer is king.

“What butchers?” ‘Richardson and Sons, opposite.’ “Opposite? But there’s nothing left here on Lowfield Street. All the shops are empty.” ‘That one isn’t. We buy our meat in there most weekends.’ I went out with my old school friends on... Continue →